Against the usual practice of such studies involving feeding rats with GM foods for 90 days ,Giles -Eric Seralini ,a molecular biologist at the University of Caen in France had for the first time ever experimented with rats for two years ,which corresponds to the entire human lifespan .As expected ,the shocking results ,peer -reviewed and published in a respected scientific journal ,have already created quite a furore internationally . 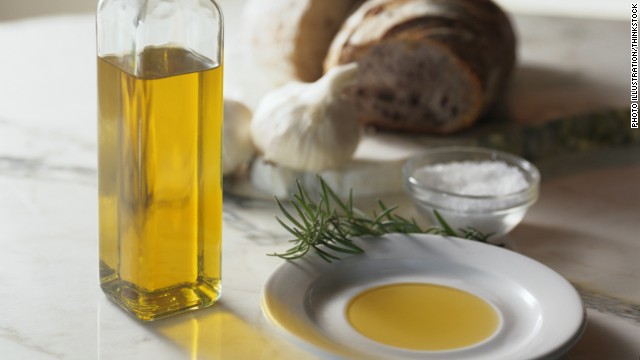 "Virgin means made with physical processes not with chemistry ,"

Mueller told NPR ."Essentially ,you crush an olive and out drops

the oil in extreme synthesis ."

5 things you may not know about olive oil


5 things you may not know about olive oil

Recently, researchers found that consuming a Mediterranean diet heavy in olive oil can help lower some heart risks. Consuming more than four tablespoons a day can significantly lower your risk of having a heart attack, suffering from a stroke or dying of heart disease, according to the recent study published in the New England Journal of Medicine.

Olive oil is high in a type of fat known as monounsaturated fat,according to the Mayo Clinic. MUFAs, as they're commonly called, can help lower your cholesterol and control insulin levels in the body. In addition to olive oil, they can be found in avocados, nuts and fatty fish.

Of course, that doesn't mean you can go overboard. Even though it's made of "healthy fats," olive oil is still high in calories and should be used in moderation. Here are five things you might not know about this Mediterranean staple:

It helps more than your heart. Olive oil is full of polyphenols, a type of antioxidant that helps protect your cells from damage. Certain polyphenols also have anti-inflammatory properties.

Scientists have been exploring the effects these polyphenols may have on bone and digestive health as well as looking into how they could help prevent cancer. Other researchers are looking into olive oil's potential for improving cognitive function and memory.

Your oil may not be extra-virgin. In 2011, reporter Tom Mueller released his book "Extra Virginity: The Sublime and Scandalous World of Olive Oil." In it, he revealed a world of deception where low quality oils and artificial coloring were being passed off as extra-virgin olive oils to the American public.

"Virgin means made with physical processes, not with chemistry," Mueller told NPR. "Essentially, you crush an olive and out drops the oil in extreme synthesis."

There are laws in Europe monitoring the use of an "extra-virgin" label, but the United States does not have strict regulations, according to Mueller.

And when companies taint the oil, Mueller said consumers lose "that wonderful cocktail of anti-inflammatories and antioxidants."

How you store it matters. When you're at the grocery store, look for olive oil that comes in a bottle made from dark green glass or another material that protects it from light, says Dr. John La Puma,founder of ChefMD.com.

Heat and light can damage the oil by creating oxidation, which changes the beneficial chemical compounds. Store your olive oil in a room-temperature cupboard or in the refrigerator to keep it cool.

A bottle of oil will last about a year on your shelf, according to theStillwater Olive Oil Co. "After this time, the taste and health benefits, such as Vitamin E, beta-carotene, and other phenol levels decrease dramatically," the company's website states.

Americans buy a lot of it. Olive oil is one of the fastest-growing global industries, according to a report from Research and Markets, an international market research and data site. While Spain and Italy top the list of both producers and consumers, Americans seem to have jumped on the Mediterranean diet bandwagon in full force.

The United States ranks third on the list of the world's largest olive oil consumers. But the U.S. may not be there for long, according to the report.

"It is expected that in the near future, India and China will be on the list of largest consumers of olive oil, as people have started recognizing the health benefits of olive oil and have accepted it as cooking oil," a release from the site says.

You don't have to eat it. Olive oil beauty products are a multibillion dollar business, according to the industry website Olive Oil Source.

"What many consumers don't realize is something that people living millennia ago in ancient Greece took for granted; that extra virgin olive oil, all by itself, is one of the best beauty secrets," the site says.

The same antioxidants that heal your internal cells may help protect your outer layer from damage. Olive oil can now be found in everything from skin moisturizers to nail care kits.

(1)DOING GOOD IS GOOD FOR YOUR HEART

Giving back through volunteering is good for your heart ,even at a young age ,according to University of British Columbia researchers .They found that the feeling of wellbeing reduced levels of inflammation and cholesterol .

(2)Wearing heels throws your balance off centre ,makes your walk unnatural and leads to back problems .

(3)Build up reserves of calcium and strengthen your bones ,especially before you turn 35.

The research shows that inadequate sleep reduced the number of genes that normally peak and wane in expression throughout the 24 -hour day from 1,855 to 1,481.

The authors found that the number of genes affected by a sleep deprivation was seven times higher after a week of insufficient sleep.

There are nerves in your neck that send calming messages to your brain and slouching squishes the vertebrae and discs in your neck ,pinching the delicate nerves and hindering their function .When you slouch  and sit ,it ups your blood pressure by as much as 16 per cent.

Breathing slowly and deeply ,taking 10 relaxed breaths per minute ,instead of the more common 16 ,helps women slash 14 points off their blood pressure in one month .Calm breathing stalls production of stress hormones and that is essential for keeping arteries relaxed and blood pressure in check .

(5)STOCK UP ON POTATOES

For top -notch blood pressure control ,eat the skin .That is where most of the potato's nutrients are stored.

The problem with processed foods that claim are low fat or fat free is that in order to give them a decent texture and taste ,manufacturers pack them with sugar ,which is a potent ,high blood pressure trigger .When your blood sugar surges ,it causes damaging inflammation inside your blood vessels ,escalating the build up of the artery stiffening plaque.

Cardamom is a slightly citrusy flavoured  spice ,which is packed with plant compounds that keep the muscles of your heart and arteries relaxed ,so pressure surges are less likely to occur.