"However, it is not all doom and gloom for smokers looking to quit this New Year. Within five years of stopping smoking, your risk can be reduced to the same as a lifetime non-smoker." 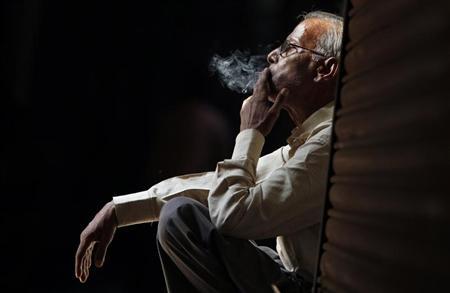 A daily wage labourer smokes as he waits for an employer in the old quarters of Delhi, April 29, 2010.
CREDIT: REUTERS/ADNAN ABIDI


Cigarettes damage your brain... and smokers have double the risk of stroke death

Smokers have double the risk of dying from a stroke, researchers have found. The warning comes as public health authorities begin a campaign highlighting the harms of smoking to the brain.


A new television commercial, which will air for the first time tomorrow, will "bring to life the toxic cycle of dirty blood" caused by inhaling cigarette smoke. While the harms of smoking to the heart and lungs are increasingly well-known and understood, health officials will draw attention to the way chemicals such as arsenic and cyanide can damage cells in the brain — increasing the risk of stroke, but also of cognitive decline and dementia.

England's chief medical officer, Sally Davies, said that she was "extremely worried" that people were still underestimating the health risks of smoking, despite it being the single biggest cause of premature deaths, with one in two smokers dying early because of diseases related to their habit.
The research, published in the New England Journal of Medicine and carried out by experts at the American Cancer Society and Harvard School of Medicine, looked at 50-year trends in mortality in the US, and found significant increases in mortality rates from smoking-related diseases among women.

More than 10 million British adults smoke – around 22 per cent of men and 19 per cent of women.
A second study, carried out at University College London (UCL), has shown that cognitive decline in men can be nearly 38% faster among persistent smokers. Gareth Hagger-Johnson, research associate at UCL, said that "all smokers should consider quitting to help protect their brain from serious long-term harm". The new ad shows a smoker inhaling, before following the route of harmful chemicals into his lungs, out into his bloodstream via his heart, and into the brain.

"We know about the serious effect smoking has on the heart and lungs but smokers need to be aware of how much potential damage is being done to the brain and other vital organs through toxins in cigarettes entering the blood," said Dame Sally.
"However, it is not all doom and gloom for smokers looking to quit this New Year. Within five years of stopping smoking, your risk can be reduced to the same as a lifetime non-smoker."
There are around 152,000 strokes in the UK every year – one every five minutes. A stroke occurs when the blood supply to the brain is cut off, causing brain cells to be damaged or die. It is the third-biggest cause of death and the brain damage suffered by many survivors also makes it the most common cause of disability.
Joe Korner, of the Stroke Association, said: "The more you smoke, the more your risk increases … Stopping smoking is one of the most important things you can do to reduce your risk of stroke."

Professor Kevin Fenton, director of health and wellbeing for Public Health England, said: "Highlighting the unseen damaging effect smoking has on the body's major organs provides a real motivation for people to stop."

Huge tobacco use in India seen killing 1.5 million a year

Tobacco inflicts huge damage on the health of India's people and could be clocking up a death toll of 1.5 million a year by 2020 if more users are not persuaded to kick the habit, an international report said on Thursday.

Despite having signed up to a global treaty on tobacco control and having numerous anti-tobacco and smoke-free laws, India is failing to implement them effectively, leaving its people vulnerable to addiction and ill health, according to the report by the International Tobacco Control Project (ITCP).
"Compared with many countries around the world, India has been proactive in introducing tobacco control legislation since 2003," said Geoffrey Fong, a professor of psychology at Canada's University of Waterloo and a co-author of the report.

"However ... the legislation currently in place is not delivering the desired results - in terms of dissuading tobacco use and encouraging quitting."
As a result, India, with a population of 1.2 billion, currently has around 275 million tobacco users, the report said.
Harm from tobacco accounts for nearly half of all cancers among males and a quarter of all cancers among females there, as well as being a major cause of heart and lung diseases.
"The tobacco epidemic in India requires urgent attention," the report said, adding that by 2020, tobacco consumption will account for more than 1.5 million Indian deaths a year.
Worldwide, the number of deaths caused by tobacco is expected to rise from around 6 million a year now to more than 8 million by 2030, according to the World Health Organisation.
The ITCP India Survey conducted face to face interviews with 8,000 tobacco users and 2,400 non-users across four Indian states - Bihar, Madhya Pradesh, Maharashtra and West Bengal.

The report said that, while India has been a regional leader in enacting tobacco control legislation over the past 10 years, the laws are poorly enforced, regulations covering smoke-free zones are patchy, and tobacco remains relatively cheap.
Fong said the low percentage of people wanting to quit meant deaths from tobacco use were destined to stay high.
"If there is any single indicator of the urgent need for continued and strengthened efforts for strong, evidence-based tobacco control in India - this is it."

Reading  a novel can trigger actual measurable changes in the brain that could remain for days after reading .New research found that reading a book could cause heightened connectivity in the brain and neurological changes that work like muscle memory .

Being exposed to bullying during childhood can lead to an increased risk of psychotic experiences in adulthood ,regardless of whether the person was a victim or perpetrator .Psychotic experiences covers everything from hearing voices and seeing things to paranoia.

(१२  )HUNGOVER ?Drink a glass of juice the next morning .Fructose helps speed up the rate that your body gets rid of the toxins .

(१३  )Want to include omega 3 fatty acids in your diet ?Your best vegetarian bets are canola oil and flaxseeds oil.

A glass of tomato juice a day could help keep breast cancer at bay ,said researchers from Rutgers University in New Jersey .Women who upped their tomato intake made more of a hormone thought to protect against the disease.