Story highlight(CNN)He removed his goggles for just a moment, to wipe away the colorful paint splattered across them, and then his life changed forever.

At that moment, the 12-year-old boy, who would become Dr. Douglas Fredrick's youngest patient with an air-gun-related eye injury, was hit in the face a second time while playing at a paintball range in New Hampshire, Fredrick said.

Without the goggles to protect him, the paintball caused one of his eyes to rupture."It was unfortunate," said Fredrick, who treated the boy while on faculty at Dartmouth College but is now a clinical professor of ophthalmology at Stanford University"He actually lost the eye," Fredrick said. "We tried repairing the eye.

We tried to sew it up, but the contents of the eye were so disorganized and the chance of visual restoration was so low that it was actually safer to remove the damaged eye."Now, about a decade later, that patient still has one healthy eye and wears glasses, Fredrick said. But the injury that haunts him serves as an example of how "air gun injuries specifically are going up." 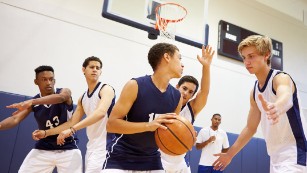 Sports-related eye injuries are most common among kids
Between 1990 and 2012, the rate of eye injuries tied to nonpowder guns -- such as BB, pellet and paintball guns -- in the United States skyrocketed 168.8%, according to a study published in the journal Pediatrics on Monday.
In that 23-year period, the most common sports- and recreation-related eye injuries among children occurred while they were playing basketball, baseball and softball or while using nonpowder guns, the study found.
"These findings demonstrate that sports- and recreation-related eye injuries are common and can be severe," said Dr. Gary Smith, director of the Center for Injury Research and Policy at Nationwide Children's Hospital in Columbus, Ohio, and senior author of the study.
Although participating in sports offers many health benefits to children, he said, the study suggests that there is a need for more eye protection during some activities, such as basketball, in which eye protection is recommended but not required and not popular among young athletes at all levels.
The American Academy of Pediatrics recommends that kids use paintball-style protective eyewear glasses that meet certain safety standards while using nonpowder guns.
"In some cases, this may require a culture change within the sport so that children are expected to use appropriate eye protection," he said. "Appropriate eye protection can help prevent injuries and keep children active and in the game." 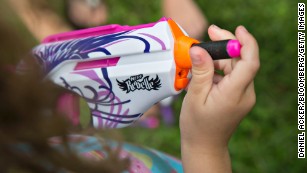 Nerf guns can pose serious eye risk, doctors warn
The study involved data on children 17 and younger who were treated for sports- and recreation-related eye injuries in hospital emergency departments across the United States from 1990 to 2012.
The data, which came from the National Electronic Injury Surveillance System, showed that on average, about 19,209 children were treated for such eye injuries each year, and there was a slight decline in the overall rate of eye injury.
"However, the rate of eye injury associated with nonpowder guns -- including BB, pellet and paintball guns -- increased by almost 170%," Smith said. "Nonpowder-gun-related eye injuries accounted for 11% of eye injuries and almost half of hospitalizations reported during the study period."
In 1990, the rate of nonpowder-gun-related eye injuries was estimated to be around 1.61 per 100,000 children. In 2012, the rate was 4.34 per 100,000 children, Smith said.
The study had some limitations, including that data included only injuries treated in emergency departments. So patients seen at an urgent care or other medical facility, for instance, were excluded.
The researchers also were unable to identify exactly why there was such a significant increase in nonpowder-gun-related eye injuries -- but experts have some ideas. 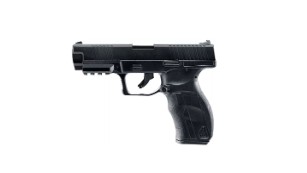 Firearms and air guns: Can you tell the difference?
"My understanding is that sales of air guns have steadily increased, so one factor may just simply be that they're there in the hands of more people now," said Dr. Jorge Gomez, primary sports medicine specialist at Texas Children's Hospital, who was not involved in the new study.
Also, "Only about 11% of the time when a child sustains an eye injury from an air gun is an adult present. In other words, 89% of the time, the child who gets hurt is getting hurt in a setting where there's no adult supervision. Now, has that deteriorated even more in the last 17 years? I don't know," he said. "But probably, those two things certainly play a factor: the number of guns available and the fact that there rarely is any adult supervision when the injuries are occurring."
With adult supervision, children can be monitored and encouraged to wear protective eye gear at all times while using an air gun -- and reminded to keep protective eyewear on, even if for a moment.
For instance, the American Academy of Pediatrics tells parents to insist that children use paintball guns only at insured commercial paintball fields that have rules for player safety and follow guidelines for safe operation.
The NRA notes that "air guns must be treated with the same respect and safety considerations given all guns" in an air rifle shooting sports safety guide.
Stanford University's Fredrick, who also was not involved in the new study, agreed that children might have greater access now than in the past to BB and air guns for shooting sports.
Follow CNN Health on Facebook and Twitter
See the latest news and share your comments with CNN Health on Facebook and Twitter.
In 2015, he co-authored a study that found that hospital admissions among children for severe nonpowder gun eye injuries increased more than 500% between 2010 and 2012. That study was published in the Journal of the American Association for Pediatric Ophthalmology and Strabismus.
"It just goes to show that it seems to be, in recent years, becoming more and more of an issue," Fredrick said.
To prevent such injuries, Gomez said, wearing eye protection at any time while firing any type of rifle is key for both children and adults.
"The other thing is, if you're a parent and you purchase an air rifle or an air gun for your child, you've got to make sure that they're properly supervised all the time," he said. "That's just essential."