A rift among experts over analyzing Trump's mental health


According to an association memo from July 6, all the leaders that answered the poll voted to keep existing policy. But, the memo continues, as far as members go, they are "free to comment about political figures as individuals."
That means if individual experts want to share their thoughts about the President's behavior, for example, they are free to do so as "APsaA does not consider political commentary by its individual members an ethical matter. APsaA's ethical code concerns clinical practice, not public commentary," the memo states.
The other group, the 37,000-member American Psychiatric Association, has a different ethics policy.
"It is unethical for a psychiatrist to offer a professional opinion unless he or she has conducted an examination and has been granted proper authorization for such a statement," according to its code of ethics. In fact, the APA's ethics committee met this winter and it expanded its existing policy, known as the "Goldwater Rule," to be even more restrictive. In the past, the Goldwater Rule was interpreted by many to apply only to official diagnosis.
Under new guidance about the rule, it is "fine for a psychiatrist to share their expertise about psychiatric issues in general," but "member psychiatrists should not give professional opinions about the mental state of someone they have not personally evaluated," according to an APA blog released after the committee's decision.
That rule, it clarified, "applies to all professional opinions offered by psychiatrists, not just diagnosis."
Doing so would be "unethical and irresponsible," wrote American Psychiatric Association President Dr. Maria A. Oquendo. "The complexity of today's media environment demands that we take special care when speaking publicly about mental health issues, particularly when what we say has the potential to damage not only our professional integrity, but the trust we share with our patients, and their confidence in our abilities as physicians."

Dr. Prudence Gourguechon, a Chicago psychiatrist, is a member of both groups, and was the past president of American Psychoanalytic Association.
Gourguechon disagrees with the APA's expanded interpretation of the Goldwater Rule and has fallen on the side of the APsaA's guidance. She said she believes that members should use their expertise on human behavior to help the public better "organize the experience that is happening around us." 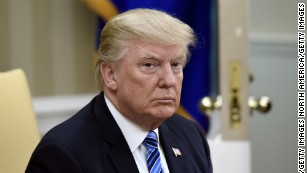 Constitutional scholars: 25th Amendment talk 'premature,' unrealistic
She penned an editorial about the President in the Los Angeles Times in June.
Her editorial suggested "as a psychiatrist, I believe we need a rational, thorough and coherent definition of the mental capacities required to carry out 'the powers and duties' of the presidency."
Gourguechon wrote that there is little in scientific literature that defines what mental capacity means for people in positions of "great responsibility." A good source, she suggests, is the US Army's Field Manual 6-22 on leadership development. It emphasizes that a leader must be trustworthy, have discipline and self-control, good judgment and the ability for complex critical thinking, self-awareness and empathy.
She does not directly disclose how she feels about the President's performance as it relates to these categories, nor does she make a diagnosis, but she does suggest that there is enough data out there that displays his behavior that "we are all free to compare that observable behavior to the list of traits deemed critical for leadership by the US Army," she wrote.
"As professionals we should not be shy about talking about really difficult things," she said in an interview with CNN.
"This is not about one person," she said. "The whole country is in a troubled place. I don't want be so grandiose to say we are treating the country as a patient, but there is terrible conflict right now and people aren't acting their best or thinking their best and we are not just talking about Donald Trump."
Nor does she see the APsaA's different philosophy on this issue as a criticism of the APA's. 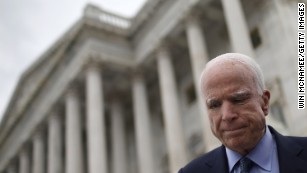 Republicans just dodged political disaster on health care
"We would never tell a sister organization what to do with their own ethics policy," she said. She said she will continue to be a member of both organizations.
A statement Tuesday from APsaA said it did not encourage its members to "defy" the APA's Goldwater Rule, but "rather, it articulated a distinct ethics position that represents the viewpoint of psychoanalysts. The field of psychoanalysis addresses the full spectrum of human behavior, and we feel that our concepts and understanding are applicable and valuable to understanding a wide range of human behaviors and cultural phenomenon," the statement said.
One 41-year member of the APA told the association to change its guidance and publicly quit in July over the issue, but has remained a member of the APsaA and told the APsaA's president that he "applauded" its policy.
Dr. Leonard Glass is a part-time associate professor of psychiatry at Harvard Medical School and works as a senior attending psychiatrist at McLean Hospital in Belmont, Massachusetts. He said while there is merit to the Goldwater Rule, he was among the professionals who signed the February letter about the President's mental health, which published in the New York Times. 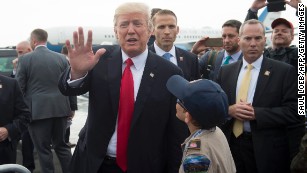 Trump's missed opportunity to be a role model for Scouts
It refrained from making a diagnosis, but emphasized there was an urgency behind their need to share their opinions about the President's mental health, which may violate the expanded interpretation of the Goldwater Rule.
"We fear that too much is at stake to be silent any longer," the letter states. Trump's speech and actions show that he has an "inability to tolerate views different from his own, leading to rage reactions" in which he is unable to empathize, and he is "attacking facts and those who convey them." The letter concluded the President's "instability" makes him "incapable of serving safely as president."
In July, Glass wrote an opinion article for Psychiatric Times in which he said he and fellow colleagues were "shocked by what we felt was the APA's 'gag rule' on this issue."
Glass told CNN he feels the APA code is "insulting" and "self-defeating." With the abundance of data available from television and the President's own Twitter feed, one can make an educated observation, he said. To restrict members from doing so is "clinging to a 40 or 50 year old rule" and shortchanges the public, particularly in such an "extraordinary and frightening time."
"It doesn't make sense that people with the greatest professional basis for commentary should keep silent," Glass said. "I'm unaware of any other medical specialty that gags its members."


The Goldwater Rule has defenders. 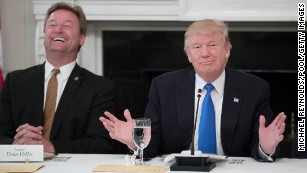 Endangered Republicans stick with Trump on key health care vote
In a counterpoint essay in the Psychiatric Times, Dr. Rebecca Brendel, a psychiatrist and director of the master's program in bioethics at Harvard Medical School Center for Bioethics, argued in favor of the Goldwater Rule, writing that "psychiatric opinions based on insufficient data and/or method, whether they include diagnoses, compromise both the integrity of the individual psychiatrist and the profession."
But an analysis and commentary, published in the Journal of the American Academy of Psychiatry and the Law last year, argued that, in general, the Goldwater Rule was "excessive." APA member Dr. Claire Pouncey and her co-authors wrote that it's "not only unnecessary," it "detracts from the deeper dictates of ethics and professionalism."
Pouncey told CNN that in trying to silence its members, the APA fails to "treat us like our own moral agents."
This winter, Pouncey gave a presentation about the Goldwater Rule at the annual APA meeting. She also met with the group's ethics committee to urge them to change its mind about the policy. She said while ethics committee individuals treated her with professional respect, there were leaders outside the committee that dismissed her argument. "I've essentially been shushed," Pouncey said.
Join the conversation
See the latest news and share your comments with CNN Health on Facebook and Twitter.
The rule, Pouncey said, "gives me no space in my separate role as a citizen or as a school board member or as a parent." For example she said if she got arrested at a public protest, that is not automatically an ethics violation, but "if I shoot my mouth off and go a little too far in my professional opinion, this rule was now construed so broadly in March, that now I'm unethical," Pouncey said.
Pouncey will continue her APA membership, but vows to continue to fight from within the organization. She adds that while she strongly opposes the policy, she does know that ultimately the Goldwater rule is "somewhat toothless" and is merely an ethics policy, meant to guide professionals. It is not a law, so no professional will lose their license if they violate these policies. "But it still gets to me."