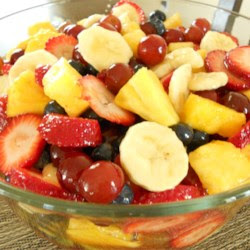 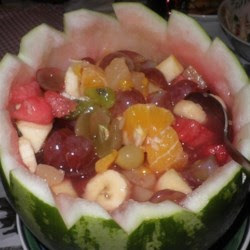 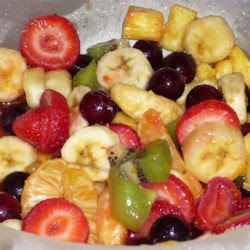 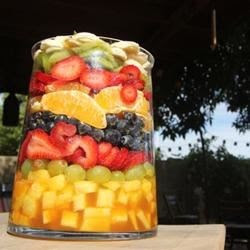 Scientists analysed lifestyle data of more than 65,000 randomly selected adults aged at least 35. They also tracked recorded deaths from among the sample for an average of 7.5 years.


On average, the survey respondents said they had eaten just under four portions of fruit and vegetables the previous day. During the monitoring period 4399 people died.
The analysis revealed that eating fruit and vegetables was associated with a lower risk of death overall and deaths from heart disease/stroke and cancer.
The higher the intake of fruit and vegetables, the greater the protective effects seemed to be.
Scientists also found that vegetables pack more of a protective punch than fruit. Around 2-3 daily portions of vegetables were linked to a 19% lower risk of death compared with a 10% lower risk for the equivalent amount of fruit. And each portion of salad or vegetables seemed to confer a 12-15% lower risk of death.
But while fresh and dried fruit seemed to strongly curb the risk of death, a portion of frozen/tinned fruit seemed to increase it by 17%, which public health doctors from the University of Liverpool describe in an accompanying editorial as "intriguing."
The UK government currently recommends eating five daily portions of fruit and vegetables, prompting the suggestion in an accompanying editorial that it may be time to review national dietary recommendations.
A diet rich in fruit and vegetables has been linked to good health but many of the studies on which this association is based have largely been carried out on people who are already likely to be health conscious.
And while plenty of fruit and vegetables in the diet are recommended to boost cardiovascular health, the evidence for its impact on warding off cancer has been less clear-cut. Scientists say added sugars in 'processed' fruit could explain this finding why eating canned fruits increases mortality risk.
They concluded that current dietary guidance which includes consumption of dried or tinned fruit, smoothies and fruit juice as legitimate ways of reaching the '5-a-day' goal, might need to be revised.

And it's exactly that endorphin rush that makes capsaicin an effective remedy for pain and other medical conditions, researchers say.
"The endorphins work to block the heat. The body produces them in response to the heat, which it senses as pain," said Paul Bosland, co-founder and director of New Mexico State University's Chile Pepper Institute.
"It's used for all kinds of arthritis pain, as well as for neuropathic pain and dermatologic conditions that have a painful itch," said Dr. Ashwin Mehta, director of integrative medicine at the University of Miami's Miller School of Medicine.
Capsaicin is also used by people with the skin disease psoriasis to decrease itching and inflammation, according to the university.
Some research has also suggested that capsaicin can also help with appetite suppression, but there are not yet any solid data to determine what role, if any, the chemical plays in weight loss.
Studies have also suggested that capsaicin may play help kill off prostate cancer cells.
"In test tubes, researchers found a correlation betwen increased cell death and capsaicin," said Mehta.
There have also been studies that found that people who eat a lot of chili peppers have a lower incidence of prostate cancer, Bosland said. 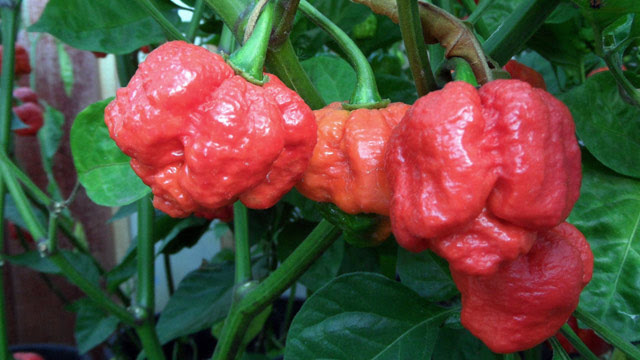 Beer can reduce levels of potentially harmful substances in grilled meat ,a new study suggests .Pilsner and black beer are most effective -having the amount of polycyclic aromatic hydrocarbons (PAHs )in grilled meat which have been linked to colorectal cancer .

Marination : Marination is the process of soaking foods in a seasoned, often acidic, liquid before cooking. The origin of the word alludes to the use of brine(aqua marina) in the pickling process, which led to the technique of adding flavor by immersion in liquid. The liquid in question, the 'marinade', can be either acidic (made with ingredients such as vinegar, lemon juice, or wine) or enzymatic (made with ingredients such as pineapple,papaya or kiwifruit).[1] In addition to these ingredients, a marinade often contains oils, herbs, and spices to further flavor the food items.

It is commonly used to flavor foods and to tenderize tougher cuts of meat.[2] The process may last seconds or days. Different marinades are used in different cuisines. For example, in Indian cuisine the marinade is usually prepared with a mixture of spices.

Marination is used to add flavor to meats and vegetables. it also can tenderize. Usually it is done with a acidic liquid such as wine or fruit juice. Then you also add spicing to the liquid. It really makes for a tasty meal.

Marination is the process where you try and soak the meat, fish, chicken, or anything in lemon juice, or yogurt or any kind of meat tenderizer, and leave it overnight or couple of hours, before you grill or barbecue it or cook it in the oven.

preparation may be an effective strategy for reducing heart

bar·be·cue  :a meal or gathering at which meat, fish, or other food is cooked out of doors on a

rack over an open fire or on a portable grill. 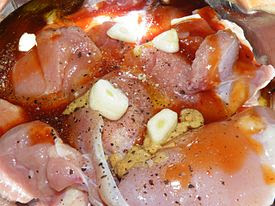