By Chetan Bhagat
In school, I remember being part of a play called 'The Emperor's New Clothes'. The plot revolved around a king who was tricked into believing that he was wearing a special outfit when in fact he was naked. His sycophants complimented him for his wonderful choice of clothing. When the Emperor went out on the street, scared commoners praised the invisible suit. Finally, an innocent little kid screamed: "Look, the Emperor has no clothes!"

The one loud sentence sent the entire town into shock. However, since it was the truth, nobody could deny it anymore. And eventually, the Emperor came back to his senses.
The Congress desperately needs the kid who could stand up at an AICC national convention and shout: "Look! Rahul Gandhi is not working at all!" One can almost predict the silence in the auditorium thereafter, akin to the silence in the town square. The first reaction would be denial, or even attacking the person who said it. Better still, label this columnist elitist, biased, paid, bigoted, idiot, evil, ignorant or any other negative adjective that comes to mind. However, as the Enrique song goes — you can run, you can hide but you can't escape my love (in this case, the truth).
This truth is particularly bitter because the Congress has little idea on how to fix the problem . As many say, if the family doesn't work, what is the Congress? Right now, the party hasn't done much besides cashing in on the Gandhi family's legacy.

In fact, it has used the family name to hide incompetence and even abused it to cover up scams. The family brand is so depleted that there isn't much legacy left anymore. The young generation doesn't know what to make of them. Should they associate the Gandhi family with sacrifice, or see them as people who keep silent and help cover up corruption? Are the Gandhis interested in making Indian lives better, or merely self-preservers ? What is the answer? It is all a big confusing mess, and youngsters see no reason why the surname means the party deserves their vote. The results are there for all to see.
The bigger issue is: how to restore the legacy ? Well, when a legacy has been destroyed, you either restore it, or build a new one. It will serve the Congress better if it does both. One, it needs to restore the Gandhi family's pride. For this, they have to become relevant to the times. The world has changed. The overload of media, connectivity and content means scrutiny levels are way higher than before. Integrity can no longer be feigned. Clever words or even calculated silences, if faked, backfire. Rahul doesn't have to talk about being honest and caring; he has to become honest and caring. If there is a new Rahul possible, we need to see him, and soon. Senior people need to be publicly humiliated and fired in the Congress — not those who lost an election, but those who destroyed the legacy. A good anti-corruption law needs to be passed, not a fake one. Rahul needs to apologize for hiding when the nation needed him. He has to show he cares for India. He has to frankly, not only become a good politician, but also a good human being. In the current climate — goodness is the new cool. He needs to talk, give interviews , get shamed even, but plow through it all and deliver despite that. The Gandhis of today need to own up to mess-ups and mistakes. They need to work day and night to fulfill the dreams of the youth. They have to stop raiding the state treasury to win last-minute votes. They have to become the 'ideals' for the nation. Are they up for it? 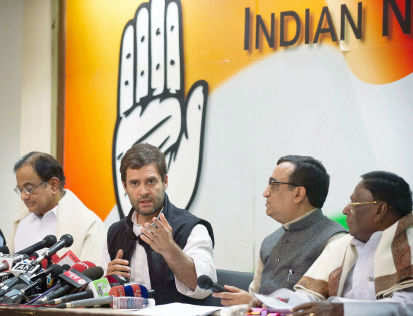 Will Rahul be made Cong’s PM candidate in January?

The Congress top brass has called for a special AICC session on January 17 when it is most likely to push Rahul Gandhi as its prime ministerial candidate.

Though no agenda for the session just ahead of the Lok Sabha polls was available, it is clear that the Amethi MP will be given the top post.

"There is consensus in the Congress on Rahul's leadership," declared AICC Secretary Priya Dutt, adding that the party had expressed its view in Jaipur during an AICC session last year that the Congress vice president should lead the country and the government.

"The Congress is looking forward to the top brass making the announcement," she said.
Congress president Sonia Gandhi had announced that the prime ministerial candidate would be announced at an appropriate time after the Congress lost the assembly polls in four of the five states that went to the polls a fortnight ago.
Dutt also denied that an announcement about Rahul as the party's PM candidate was either too late or that he would have to compete with a formidable rival in Narendra Modi.
"It is not question of competition. We have a subtle projection. We are not aggressive or in your face like others," she said.
As for the timing, Dutt pointed that until recently, Rahul had focused on the organisation and been working with the Youth Congress and the National Students Union of India. Now, she added, he was ready for bigger responsibilities.
When asked about the Congress's poor showing in the recent assembly elections, party spokesman Bhakta Charan Das claimed that the BJP had only 'won' in Rajasthan.

"The BJP was in power in MP and Chhatisgarh which they retained. AAP is the real winner in Delhi. So there is no Modi wave," he said. 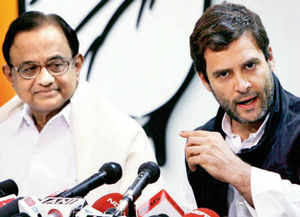 Cong leaders say that there is a consensus in the party on Rahul’s leadership
प्रस्तुतकर्ता virendra sharma पर 7:25 am