US life expectancy drops for second year in a row


Life expectancy in the United States has dropped again following last year's decline, which marked the first downturn in more than two decades.


On average, Americans can now expect to live 78.6 years, a statistically significant drop of 0.1 year, according to a report on 2016 data published Thursday by the National Center for Health Statistics. Women can now expect to live a full five years longer than men: 81.1 years vs. 76.1 years.
The last time the agency recorded a multiyear drop was in 1962 and 1963.
"I still don't think you can call it a trend, because you really need more than two data points to call something a trend," said Bob Anderson, chief of the mortality statistics branch at the National Center for Health Statistics, part of the US Centers for Disease Control and Prevention. "But it's certainly concerning to see this two years in a row."
Anderson said he is particularly concerned about drug overdose deaths, most of which are opioid-related.
"We have data for almost half of 2017 at this point. It's still quite provisional, but it suggests that we're in for another increase" in drug-related deaths, he said. "If we're not careful, we could end up with declining life expectancy for three years in a row, which we haven't seen since the Spanish flu, 100 years ago."
The 10 leading causes of death remain unchanged and now account for 74.1% of all deaths in the United States, according to the report. Age-adjusted death rates decreased for seven of the top 10 leading causes of death: heart disease, cancer, chronic lower respiratory disease, stroke, diabetes, influenza and pneumonia, and kidney disease. The rates increased for unintentional injuries, Alzheimer's disease and suicide.
Unintentional injuries include accidental drug overdoses, which were the official cause of 63,600 deaths last year.
"It just keeps going up and up and appears to be accelerating," Anderson said.
"In the past, those increases have been more than completely offset by declines in cardiovascular mortality," such as heart disease and stroke, he said. "What's happened in recent years, since about 2010 or so, is a substantial slowdown in the rate of decline for cardiovascular mortality. It seems to be leveling off to some extent, and as a result, the drug overdose deaths are more prominent in the overall picture of mortality."
A country's infant mortality rate (the number of births compared with the number of deaths of children under age 1) "is generally regarded as a good indicator of the overall health of a population," according to the report. In the United States, this rate "changed from 589.5 infant deaths per 100,000 live births in 2015 to 587.0 in 2016, but this change was not statistically significant." 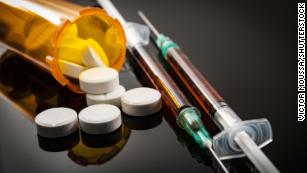 The biggest takeaway from the report is that heart disease and cancer are still far and away the top killers of both men and women in the United States. The good news is that there are three things you can do to drastically reduce your risk of developing both: eat right, exercise and don't smoke.
It sounds like simple advice, but as anyone who has ever tried knows, it is easier said than done.