for landfall in India: NASA

Washington: Tropical cyclone Hudhud is expected to intensify and peak to around 100 knots (185 kmph) before landfall near Visakhapatnam in Andhra Pradesh late Sunday, forecasts based on NASA data show.

NASA's Aqua satellite passed over Hudhud yesterday as it reached hurricane-force.
The data showed the coldest cloud top temperatures were in thunderstorms. Cloud top temperatures were as cold as -53 degree Celsius, which have the potential for dropping heavy rainfall.
Hudhud's maximum sustained winds were nearer to 75 knots (138.9 kph) FridayIt was centred near 15.5 north and 86.7 east, about 250 nautical miles southeast Visakhapatnam.
Hudhud has tracked northwestward at 6 knots (11.1 kph).

Forecasters at the Joint Typhoon Warning Center (JTWC) of the US Navy indicated yesterday that animated enhanced infrared satellite imagery showed that bands of thunderstorms have become more tightly wrapped into the low-level centre. In addition, micro-wave satellite data revealed an eye in the storm.
The JTWC expects the cyclone to remain on a generally west-northwestward trajectory over the next couple of days.

Over 1.5 Lakh People Evacuated in Five Districts of Andhra Pradesh

lakh people have been evacuated from vulnerable areas of five coastal districts of Andhra Pradesh which are expected to be hit by a rainfall of up to 45 cm in the next two days under the impact of very severe cyclonic storm 'Hudhud' that is due to have a landfall near Visakhapatnam around today afternoon.
The people were evacuated from vulnerable areas in Srikakulam, Vizianagaram, Visakhapatnam, East Godavari and West Godavari districts to safer places by this evening even as National Disaster Response Force (NDRF) and Armed Forces teams, along with the state government machinery, are ready to carry out further evacuation as 'Hudhud' nears its landfall.

Visakhapatnam district is expected to bear the brunt with rainfall ranging from 400 mm to 450 mm, according to Chief Minister N Chandrababu Naidu.

"Apart from Visakhapatnam, Srikakulam, Vizianagaram and East Godavari districts will also receive very heavy rainfall under the impact of Hudhud," Mr Naidu told reporters tonight after a video-conference with Collectors of the coastal districts with whom he reviewed the preparedness and ongoing rescue operations.
"We are monitoring the situation on a real-time basis using satellite imagery, remote sensing and space technology.
This is the first time we are using technology in a big way to assess the situation and take all steps to prevent loss of life (human and cattle) and ensure minimal damage to properties, if any. We are also using 'crowd-sourcing' in rescue and relief operations," Mr Naidu said.
Mr Naidu also appealed to people in cyclone-prone areas to help government with the images of destruction.

"I request the people in cyclone-prone areas to help us with images of destruction, if any, so that it will be useful for the administration to collect real-time data. We will acknowledge the data obtained from people through crowd-sourcing and recognise them," the chief minister said.
He said that the Centre was also closely monitoring the situation. "I spoke to the Union Cabinet Secretary and also Indian Space Research Organisation (ISRO) Chairman Radhakrishnan," Mr Naidu added. 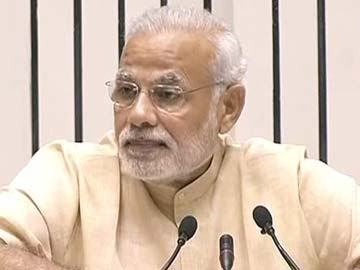 NEW DELHI:  As heavy rains accompanied by winds lashed parts of north coastal Andhra Pradesh on Saturday evening, Prime Minister Narendra Modi chaired an emergency high-level meeting to review the preparedness for Cyclone Hudhud.
After reviewing the emerging situation, the prime minister asked Home Minister Rajnath Singh to remain in touch with chief ministers of the states likely to be affected by the cyclone.

PM Modi instructed senior officers of the Union government to maintain close contact and coordination with officers of the affected states, to ensure that relief and rescue operations proceed smoothly. According to an official statement, he said suitable arrangements should be made to inform people about the cyclone on a real-time basis.

The prime minister was also briefed on evacuation and other ongoing precautionary and preparatory measures being undertaken for the cyclone. These include deployment of teams from the Armed Forces and National Disaster Response Force (NDRF), depletion of reservoirs to accommodate cyclonic rainwater, positioning of boats, swimmers and relief camps and standby systems to restore power and telecom services, the statement added.

The meeting was attended by the Cabinet Secretary Ajit Seth, the principal secretary to the prime minister, the home secretary, the defence secretary and other senior officials from the India Meteorological Department and the Prime Minister's Office.
High alert has been sounded in the northern coastal districts of Srikakulam, Vijayanagaram and Visakhapatnam and adjoining districts of East Godavari and West Godavari which are bracing for the cyclone, which is all set to make a landfall around Visakhapatnam on Sunday forenoon.

NEW DELHI:  Over one lakh people have been evacuated from the coastal districts of Andhra Pradesh as Hudhud, described as a "very severe cyclonic storm", barrels towards the state and neighbouring Odisha.
The cyclone is expected to make landfall near Visakhapatnam in Andhra Pradesh around noon and could pack gusts of 195 kilometres per hour and dump more than 24.5 cm of rain when it hits the coast.

Here are the latest developments:

Prime Minister Narendra Modi chaired an emergency high-level meeting on Saturday to review preparedness for the cyclone and asked officials to work with the concerned state governments to ensure "zero casualty".

The Ministry of Home Affairs has also launched a 24-hour helpline for cyclone-related information.

Around 150,000 people have been evacuated in Andhra Pradesh to high-rise buildings, shelters and relief centres, said senior disaster management official Hymabati. A further 50,000 may still be moved to safety, she added.

Officials said 370 relief camps have been opened in five districts - Srikakulam, Vizianagaram, Visakhapatnam, East Godavari and West Godavari - where 396 villages are likely to be affected.

Authorities have closed the Ichapuram-Kakinada national highway for traffic. Kakinada-Uppada highway in East Godavari district was damaged as water gushing out of sea due to high waves inundated the road. Fishing operations have been suspended while highest warning signal has been hoisted at the ports in the region.

In neighbouring Odisha, authorities were more worried about torrential rains than gusting winds which were expected to lose speed by the time they hit the state later today.

"We are expecting flash floods and heavy rainfall after the cyclone hits," said PK Mohapatra, special relief commissioner of Odisha, where more than 300,000 people in eight districts would feel the storm's force.

The National Disaster Response Force (NDRF) is airlifting a number of large metal and wood cutters from New Delhi to Andhra Pradesh and Odisha and has increased the strength of its relief teams on standby from 39 to 44. The saw-cutters will be used to tear up big trees and other metal objects likely to be uprooted and scattered by the gusty and ferocious winds.

The East Coast Railway has decided to cancel the services of 38 trains on the Bhubaneswar-Visakhapatnam route from 6 am today. "We do not want even a single casualty," said a railway official, adding, "The entire section would be closed to all mail, express and passenger trains".

A year ago, a severe cyclone called Phailin battered the same region, also on October 12. Strong disaster preparedness, including the evacuation of nearly one million people to cyclone shelters, helped save the day. 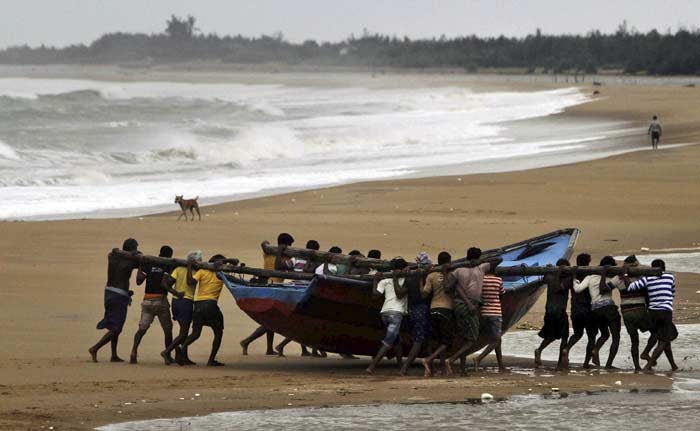